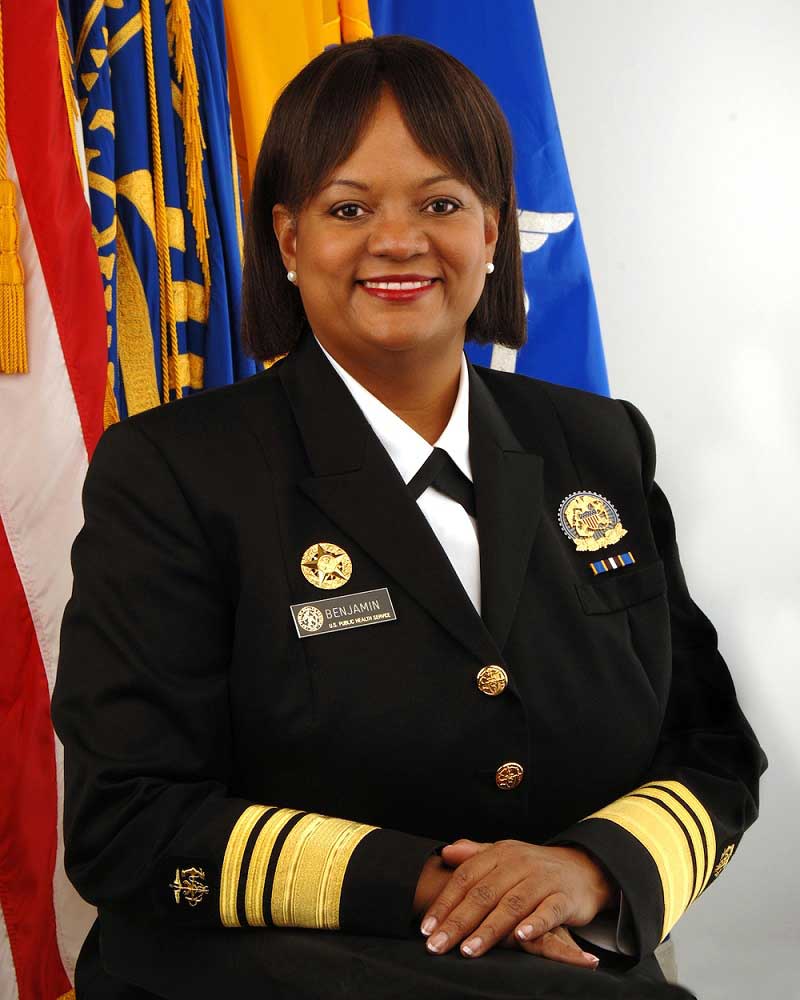 Regina Benjamin, MD, MBA is the Founder and CEO of Bayou Clinic, and was the 18th United States Surgeon General (2009-2013). As America’s Doctor, she provided the public with the best scientific information available on how to improve their health and the health of the nation. Dr. Benjamin also oversaw the operational command of 6,500 uniformed public health officers who serve in locations around the world to promote and protect the health of the American people. As chair of the National Prevention Council–17 cabinet-level federal agency heads, she led the development of the National Prevention Strategy: America’s Plan for Better Health and Wellness. Dr. Benjamin specializes in prevention policies and health promotion among individuals as well as large populations, especially concerning obesity, childhood obesity, and children’s health. She has a special interest in rural health care, health disparities among socio-economic groups, suicide, violence, and mental health.

From her early days as the founder of a rural health clinic in Alabama to her leadership role in the worldwide advancement of preventive health, Dr. Regina Benjamin has forged a career that has been recognized by a broad spectrum of organizations and publications. In 1995, she was the first physician under the age of 40 and the first African American woman to be elected to the American Medical Association Board of Trustees. Other past board memberships include the Robert Wood Johnson Foundation, Kaiser Family Foundation Commission on Medicaid and the Uninsured, Catholic Health Association, and Morehouse School of Medicine.

Dr. Benjamin advises or consults with various growth companies, including technology and healthcare. She currently serves on the boards of Kaiser Hospitals and Health Plan; Ascension; Conva Tec PLC; Computer Technology Systems Inc (CPSI); and the American Heart Association. Dr. Benjamin is one of the task members of the Bipartisan Policy Center’s Behavioral Health Integration Task Force that calls for the integration of primary care, mental health, and substance use services.

Dr. Benjamin is a member of the Institute of Medicine and a Fellow of the American Academy of Family Physicians. She has been chosen as a Kellogg National Fellow and Rockefeller Next Generation Leader.

In 1998 Dr. Benjamin was the United States recipient of the Nelson Mandela Award for Health and Human Rights. She received the 2000 National Caring Award, which was inspired by Mother Teresa and was recognized with the Papal honor Pro Ecclesia et Ponticifice from Pope Benedict XVI. In 2008, she was honored with a MacArthur Genius Award Fellowship. In 2011, Dr. Benjamin became the recipient of the Chairman’s Award at the 42nd NAACP Image Awards

In May 2013, Reader’s Digest, ranked her #22 of the “100 Most Trusted People in America. Benjamin has a B.S. in chemistry from Xavier University, New Orleans, attended Morehouse School of Medicine, earned an MD degree from the University of Alabama at Birmingham, and an MBA from Tulane University. She is the recipient of 30 honorary degrees.