The risk factors for the development of both prediabetes and type 2 diabetes mellitus (T2DM) are as follows:1

The American Diabetes Association (ADA) recommendations are similar: they suggest screening obese adults (aged ≥18 years) who have one or more diabetes risk factors, as well as screening everyone aged ≥45 years at least every 3 years. Negative screening tests should be repeated every 3 years, according to the ADA.2

Type 2 diabetes is typically identified in persons older than 30 years who are overweight or obese and/or have a positive family history but do not have autoantibodies characteristic of type 1 diabetes (T1D). Most people with T2D have evidence of insulin resistance (such as high triglycerides or low HDL-C).1

T2D likely develops as a result of polygenic defects that predispose affected individuals to the disease. Environmental factors such as a sedentary lifestyle and a high-fat diet can exacerbate defects in both insulin secretion from pancreatic β-cells and insulin action in muscle and adipose tissues. The modest hyperglycemia characteristic of the prediabetic state (A1C 5.5% to 6.4%) results in glucotoxicity, while in overweight individuals (particularly those with central adiposity), elevated free fatty acid (FFA) levels lead to lipotoxicity. Both glucotoxicity and lipotoxicity worsen β-cell secretion, which in turn aggravates hyperglycemia. Once glucose levels rise above the diabetic threshold, T2D ensues.3-6

Many organ systems are involved in the pathophysiology of T2D, as follows:7

The complex interplay between these defects contributes to the ongoing progression of T2D, although the disease itself results mainly from the first 3 defects: impaired insulin secretion from β-cells, impaired insulin action in muscle, and increased hepatic glucose production. Most patients will require a T2D treatment approach that addresses more than 1 of these factors.

T2D develops and progressively worsens over time, as shown in this figure: 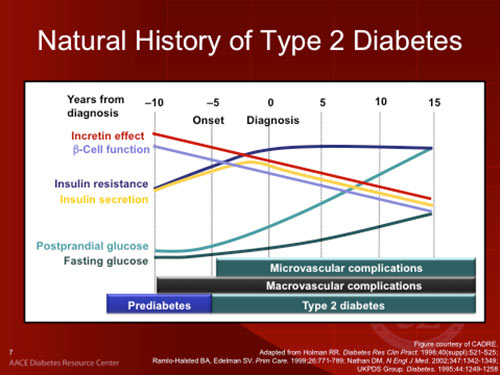 Initially, an increase in insulin resistance and impairments in β-cell function and the incretin effect interact, over time resulting in a relative insulin deficiency as well as excessive glucagon production (leading to overproduction of endogenous glucose in the liver). In response, first postprandial and then fasting blood glucose levels begin to rise.8-11

Hyperglycemia worsens all of the underlying pathophysiologic defects of T2D.7 It is also an independent risk factor for macrovascular disease, the risks of which begin to increase during the prediabetic phase.12-14 Furthermore, hyperglycemia directly leads to the microvascular complications of diabetes.15-17

Because patients with early T2D are often asymptomatic, the disease may not be diagnosed for many years after its onset.9,11 As a result, as many as 25% of patients have already developed 1 or more microvascular complications by the time of diagnosis.18